Welcome to the second chapter in the Darksburg Dev Diaries! Where today we will be talking with our Art Director Jérémy and 3D Artist extraordinaire Philémon about all the work that goes into conceiving, creating and finalizing some of the unique and distinctive characters that you're going have the chance to meet in Darksburg.

What influences inspired you for the Survivors characters design?

"I was really inspired by the character design in recent games like Battlerite, Overwatch and Paladins in terms of stylization and how vibrant the characters look, but I tried to find something in the design process that would make it feel "Darksburg" and not like it could fit in or was lifted from either of these games.

Since we have a top-down view in game, we had to exaggerate the body shapes and the scale of their accessories/weapons. We also had to simplify the characters color-palettes as much as possible so that they would be more recognizable and readable whilst playing against hordes of zombies."

What are the steps of a new character creation?

"We mainly focus on the gameplay feel whenever we want to add a new character to our roster but we also want to find some cool visual ideas. So it's actually quite straightforward: as soon as we have an idea of what the character should do and how it should be played, we start working on the early sketches and push it to the final concept through iterations with the game design team. At this point, we also begin work on the concept for their skills and abilities visual effects and how they would look in the game.

"Once Jeremy has done some good sketches for a new character, I start with a 3D template that we compare in-game to the other characters, to check the proportions and level of details. Then, when the character design is approved by the team, I start the high resolution modeling phase in which Jeremy gives me a lot of feedback and paint-over, this way, I can make sure it lines up with what he wants.
Then, when the team is happy with the result, I create a low-polygon model on top of the previous one, which will be the in-game model.

Now, with the help of some software, I transfer all the details from the first 3d model to the new one by generating base textures. We call this: the baking phase. Finally I can work on the final textures, adding colours and set the amount of reflection/metal for each material.

To be sure the character works in game, I regularly put it in our engine to check the level of details, the tints, the saturation, etc, to ensure that all of the main aspects of the character are well readable in the game view. I am satisfied only when Jeremy and the team are convinced and happy with the result and follow this process until the character is done."

What ambience or theme did you want to reflect through the characters design?

We really wanted to avoid being too obvious in terms of fantasy stereotypes. We didn't want people to play yet another "warrior" or "paladin" or "mage" even if the game is set in a low-fantasy environment. So we decided to go for a more "down to earth" approach in terms of "character class" : an Innkeeper, a Nun, a headhunter and yeah, a werewolf because he looks badass and brings a bit more depth to the lore and even a plague doct.. oops did I say too much? 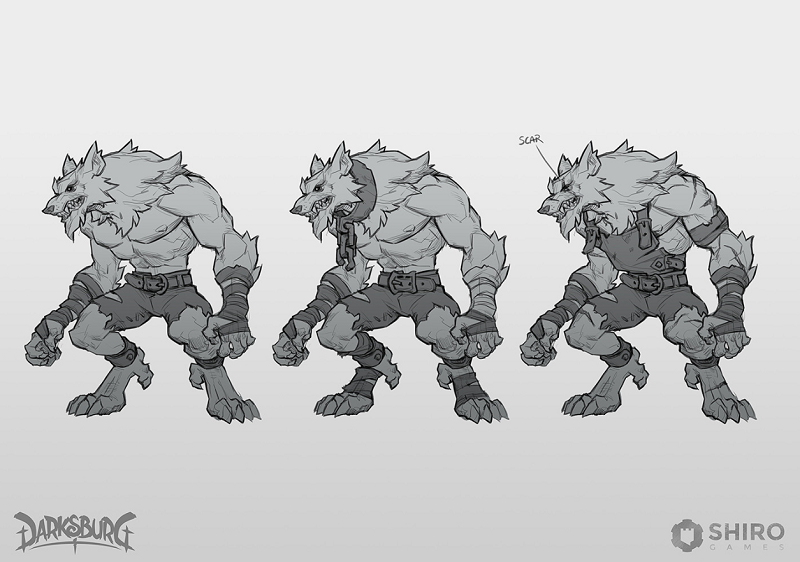 Who was the first character designed and why?

"Our first character was Sister Gwendoline (which we eventually renamed Sister Abigail) and she was supposed to be a badass nun fighting with a huge hammer. Honestly, there's no particular reason as to why we decided to go for her first, except that the idea seemed super awesome and it would be such a blast to kick off a new project by showing some crazy-cool concept arts to the team. Also, I must say that it was, in my opinion, the best idea to show that the game would be featuring unusual badass characters instead of the redundant fantasy-esque classes." 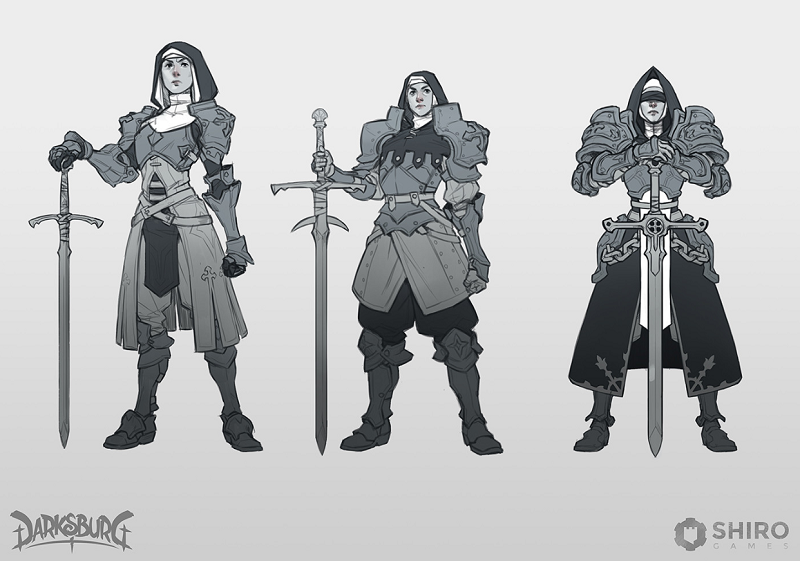 What were the main challenges you faced when designing the characters?

"To have them look extra-cool mostly, to make the players go "damn they look nice, I want to play every single one of them!!". It's really hard to achieve when you go "hey guys, let's play as an Innkeeper!" So basically yeah, for me, it was all in the design process, trying to find just the right amount of cool stuff without overdoing it everytime."

"We have one constraint which has a huge influence on the characters’ graphics processing; the top-down game view, far from the action. The characters must be readable from a distance and they can’t be too “noisy”. Some characters’ parts could be scaled up or inflated to make them visible and a lot of these seem huge up close, but perfectly sized in-game.

We also try to focus on the main shapes and avoid small details. For example, I make as few folds as possible and I simplify them as much as I can. Every aspect of our character creation is driven by this constraint. Shapes, Colours, Objects size, etc.. It seems obvious, but It’s really important to see the 3d model in the game view frequently throughout the process to avoid and potential surprises at the end, which could result in having to rework entire character aspects."

Check out some of Philémon and Jeremy's artwork by clicking the links below!