We are incredibly excited to announce we have concluded the Early Access development of Darksburg and have today officially launched Darksburg into 1.0! Firstly we’d like to thank everyone who joined us in Early Access and helped us shape darksburg into what it is today and secondly, we’d like to welcome all the new players who are joining us for the next phase of Darksburgs life!

We can’t wait to show you guys all what’s in store for the future of Darksburg.

Darksburg 1.0 brings a huge number of new additions and improvements, in addition to everything that has come to the game since our initial release into Early Access including Ascension mode, a rework of numerous characters move sets, new character skins, Etc…

You can find the full details of everything new in 1.0 here!

The town of Darksburg has been subject to an outbreak of unprecedented proportions, morphing the formerly quaint and lively town into a… well, much less lively town at the very least. And at the very most, there’s zombies like, everywhere. Which is not ideal for a town that depends heavily on its tourism industry to get by. Your job is to take charge of one of the few remaining survivors of Darksburg, and escape. Easy right?

Well, not really, as in addition to the zombies (Did we mention there’s thousands of them? But that isn’t important right now) you’ll also have to worry about some of the more notorious former residents of the town that have turned into the super zombies we’ve been affectionately calling “revenants”, who have a variety of nefarious abilities they’ll use to quash any attempts at escape, have fun with them.

Last note, we’ve also heard rumours that our towns formerly beloved leader might have gone a little mad and be actively trying to kill the living. We can’t confirm due to liability reasons, but suggest you keep an eye out...

In Darksburg you take on the role of one of 2 (to 4) survivors in their attempt to escape the city via various deep, interconnected, procedurally generated environments, improving and developing your character with numerous enhancements, perks and items you will find along the way as you attempt to evade and defeat the zombies and nefarious revenants that have been plaguing the town of Darksburg and escape unscathed…

But of course, you can’t spell “roguelite” without “death” (well, you can, but you see what we mean here), so any experience, level and perks you acquire during a run are lost if all Survivors meet their demise. Only the mysterious “curios of Darksburg” will stick around, provided you managed to unlock them. So whatever you do, stay alive.

What does the future hold?

Well, we have a plethora of ideas floating around on what we’d next like to bring to Darksburg and depending on how well Darksburg is received, we really hope to bring as many of these to reality as possible. At the very least we’ll be seeing more skins, new perks, new affixes, artifacts and items in the near future, with more to come down the line! And of course, bug fixes and balancing tweaks galore!

Thank you all once again!

Darksburg is what it is today thanks to the fantastic community who have joined us for the ride since launch and we can’t wait to see this community grow with all of the new players who will be joining us in our favourite zombie infested medieval town. Don’t forget to Join us on Discord and follow us on Facebook and twitter to join our wonderful community and keep up to date with all things Darksburg!

“Something strange is happening in the town of Darksburg, and we’re not talking about the swathes of undead miscreants roaming the town or the former ruler of the province seemingly now being hellbent on hunting down anyone who has had the fortune of avoiding zombification.

No, something much more unprecedented appears to be at hand here. When the outbreak began, the roads and back alleys were just as you’d expect from any aging town, linear, well travelled and unchanged for centuries (Mostly thanks to the labourers who worked tirelessly to rectify the strange and disjointed town developments put in place by the inhabitants of Darksburg).

Now however, likely due to the chaos that has engulfed the region and the Construction Workers Union unequivocally refusing to allow any work in the town until the zombie outbreak is under control because they “don’t want their workers being eaten” or something, Darksburg has fallen into a state of disrepair.

Streets that were formerly easily navigated and unremarkable, yet familiar now instead almost seem to diverge and morph with every visit, areas our survivors have never before laid eyes on seem to loom around every corner and the town now resembles something much closer to a labyrinth than a formerly prosperous abode…”

The "Going Rogue" beta update is here! Introducing the premier Darksburg game mode “Outbreak”, which takes the staples of Darksburg as you know it, and blends it with classic Roguelite gameplay alongside a bunch of changes and updates!

In Outbreak you take on the role of one of 2 survivors in their attempt to escape the city via various deep, interconnected, procedurally generated environments, improving and developing your character with numerous enhancements, perks and items you will find along the way as you attempt to evade and defeat the zombies and nefarious revenants that have been plaguing the town of Darksburg and escape unscathed…

But of course, you can’t spell “roguelite” without “death” (well, you can, but you see what we mean here), so any experience, level and perks you acquire during a run are lost if all Survivors meet their demise. Only the mysterious “curios of Darksburg” will stick around, provided you managed to unlock them.

So whatever you do, stay alive.

Unlike Darksburgs initial 4 player focus, Outbreak is tailored towards two players and will provide countless new ways to approach and tackle the game, unique and constantly evolving character builds, more substantial and varied interconnected environments and a wildly different, massively rewarding experience with every run.

Keep in mind, this is the first iteration of “Outbreak”, and we will be constantly updating, adding to and developing the mode over the duration of the early access campaign based on what we hear back from our players.

So as the case has always been, keep your feedback coming! Everything we receive from you guys goes towards the development of Darksburg and we’d love to hear all your thoughts and feedback with regards to “Outbreak” (how we can improve it, what needs to be added or changed, what works and what doesn’t.)

First off, we would like to thank all of you for all of the feedback you have provided since release! Using this feedback and all of the expert insights from our community, we have begun to define the direction we think would be best to take Darksburg going forward and we are glad to inform you that a substantial update is in motion right now to address the most pertinent key community concerns such as limited replayability, content and repetitive maps. We are targeting May/June to release this update and we hope to share more info on that front in the coming weeks.

Before this update, we will be seeing the first of our new survivors joining the game next month (April), a unique and interesting new character who some of you may have seen teased already and we are certain is going to make a splash with the people of Darksburg.

In the meantime though, we’re releasing an update TODAY. Introducing a host of bug fixes, minor updates based on player reports and feedback, some system tweaks and... OH YEAH, The Blackguard Squad, a new foe joining the legion of undead that patrol the streets of Darksburg and might be one of the toughest challenges our survivors have seen yet.

Mushrooming's spawn system has been slightly altered: Mushrooms now spawn on the fly around Runolf instead of being pre-spawned on the map. It solves many pesky issues, and is more beneficial to players, as they don't run the risk of running out of Mushrooms, waiting for their respawn on smaller maps. 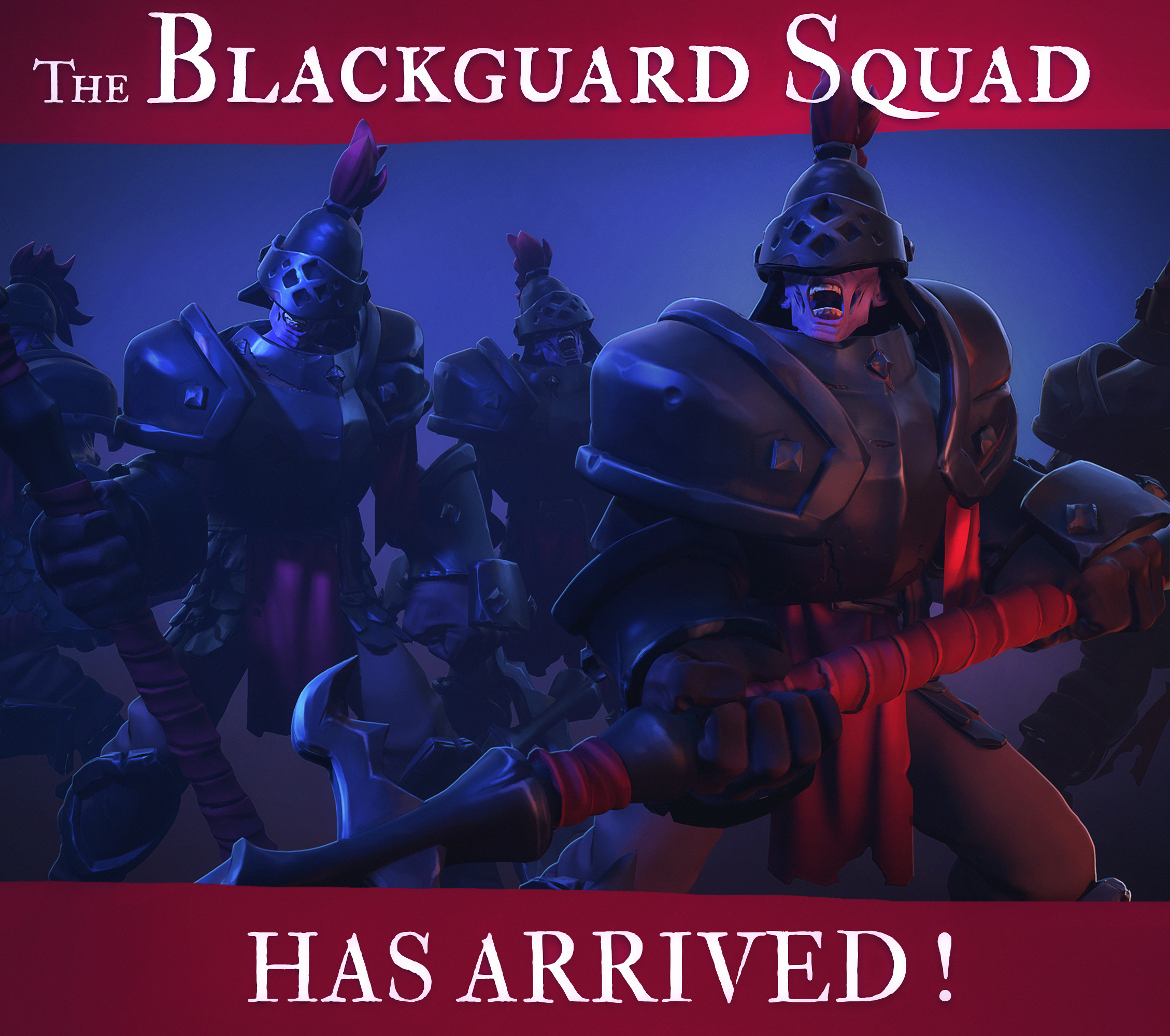 That’s all for now, once again thank you all for your support since release, we are so happy to have the opportunity to grow the game alongside you guys and we’re incredibly excited to get the new character in your hands next month and start sharing the contents of our May update with you all as soon as we can.